Young Vijaykumar was working hard to pursue a career in Chartered Accountancy and had planned to study at a reputed coaching center in Kollam, Kerala.

However, his dream was shattered when his father, Ganeshan, succumbed to COVID-19. Although he had only completed high school himself, Ganeshan always strove tirelessly to ensure better prospects for his children. He was aware that in helping his children achieve their dreams of pursuing higher education, the fortunes of the entire family would change for the better.

When the SSM Kerala team heard of Vijaykumar's plight, they decided to offer the considerable tuition fee of the coaching institute and thereby prevent the disruption of his education. 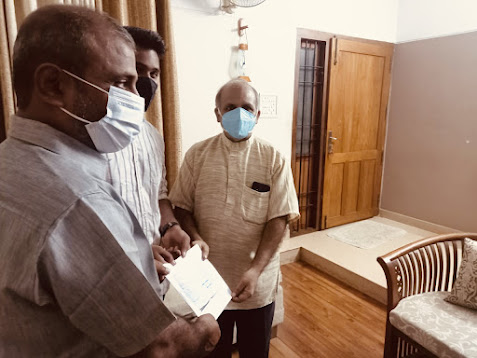 Given that The Satsang Foundation accords paramount importance to the education of lesser privileged children, the SSM Kerala team initiated the COVID Relief Educational Support Project so that several deserving students like Vijaykumar would benefit from crucial financial support.

The management of the reputed coaching institute magnanimously waived off 50 % of Vijaykumar's fees, while the team provided the rest, including his examination fee. The

team thereby ensured that Vijaykumar's future remained bright and that he would hopefully ensure that the family did not get pushed into the margins by the untimely death of his father.