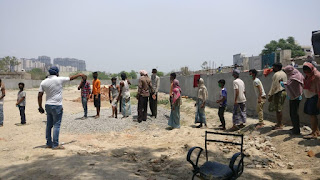 Noida is home to a large migrant community that provides services as domestic workers, rickshaw pullers, and daily wage-workers in construction.  The construction community is particularly vulnerable as most of them are housed in temporary tenements and semi-finished buildings, several without family, being brought here by contractors who in turn, are unable to support them financially at present or send them home.  The plight of the workers is further compounded by their inability to access government ration programs or linked Aadhar card schemes.  Large numbers have decided to walk back home, driven by hunger.

The Noida Expressway is a location where stranded workers are being convinced to stay in place by the police, in labour camps.  Based on research in concert with the local police, we identified clusters in Sector 133 and 134 on Noida Expressway for distribution of dry rations.  The police have been instrumental in helping and feeding their constituents, painstakingly maintaining lists of migrant workers who require help.  It would not have been possible to reach this cohort of workers without their help. 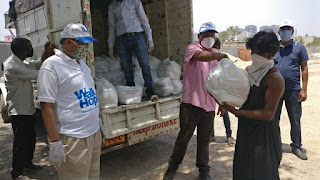 On a bright Monday morning, SSM volunteers set out with one hundred bags of dry rations designed to sustain small families (5 kg atta, 5 kg rice, 1.5 kg daal, 1 kg salt, 1 kg salt, half a litre of cooking oil, tea, and Dettol soap) for a few weeks.  First stop-Noida Expressway Police Station, Sector 135.  Escorted by the police, we reached then reached the labour camps of Sector 133 (Wazidpur Labour Camp).  Over four hundred construction workers brought by over 24 contractors are housed there.  While a few have received some support by contractors, the majority have not.  Distraught and wanting to go home, we were informed that several hundred construction workers had set out, by bus, on foot, just the night before.  In that milieu were also about twenty men who had returned from over crowded bus and train stations.  The police painstakingly, and patiently, from their list, re-confirmed that each recipient on their list was indeed in need before the bag of dry rations were given to them.  We distributed over 60 bags here. 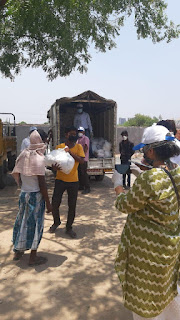 Next, were clusters in Sector 134 and 135 that included daily wage-workers, domestic workers, and other migrants who have lost their jobs. While the local community supported them in the initial days of lockdown, resources have since run thin and we saw relief on police faces as well as of the community as the SSM distributed and interacted with people on site.  Once again, the police took exemplary care in ensuring packages made it to the people most in need.  The rest of the packages were distributed in this manner, with the contents of nine packages being divided into 18 smaller packages to be shared amongst workers who lived without families.

The stories to recount are many: construction workers who have managed to survive for weeks on end but are now nearing the end of their tether.  Of communities, struggling to sustain their people, desperate for help.  Small children, glad to receive face-masks that fit them.  Of an abandoned mother, fending for three physically challenged child.

But there are stories of hope as well.  Exemplary service and assistance rendered by police who have been rescuing families setting off on foot for Bihar, Madhya Pradesh, Orissa, and pleading with them to stay put until they can arrange transport.  And food.  In the words of the Station in charge, Shri Yogesh Malik of Thana Noida Expressway, “Majdooron ke liye aapke Foundation ka sahyog saraahniya hai.”

With your help, may we continue to serve those who need our support the most, responding dynamically and whole-heartedly, to the challenges of these times.