Noida is home to a large migrant community that provides services as domestic workers, rickshaw pullers, and daily wage-workers in construction.  For seven days, we distributed 350 packets of cooked food (5 puris and halwa/kala chana) to workers and to passengers bound for destinations in Uttar Pradesh, Bihar, and Jharkhand.  Between May 21-27, we served 2,450 hot food packets of Puri Halwa/Chana to migrant workers in Noida.  We also provided 985 (850 adult and 135 childrens) facemasks.

We enlisted the help of the local police to carry out this project, beginning first with unemployed daily wage-workers, including construction workers at labour camps.  Concurrently, the UP government began dispatching migrant workers on buses to destinations in Uttar Pradesh.  As the state governments arranged trains, Noida police also took on the transport of these passengers to railway stations.

Consequently, our primary distribution turned out to be the temporary bus station at the NSEZ metro station manned by the police.  A daily report is included below. 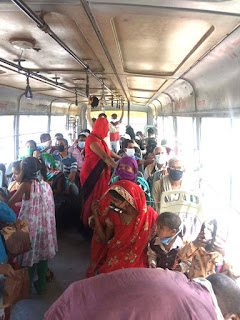 We are very happy to report that we were able to distribute 350 packets of cooked food (5 puris and halwa) to migrant workers. With the help of the police, our volunteers even chased down a bus that had left without food and distributed the packets to them.

All in all, we provided food for passengers in 2 buses, and passengers waiting to board buses at a temporary bus stand organized by the police in Sector 136. Our arrival was timely as there was no food on-board the buses. We also distributed food to a village in Chaprauli road, Sector 135, and to a labour camp in Sector 134, all with police assistance. As important, were impromptu sessions delivered by volunteers on the importance of social distancing and wearing masks. We also distributed 100 masks to adults and 30 masks for children.

We look forward to serving through the week. 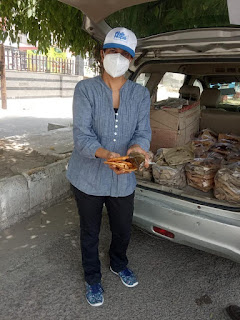 Today was day 2 of distribution of cooked food packets in Noida. In all, 350 food packets (puri and halwa) were distributed, with the help of the police, at three locations in Noida. Our first two stops were Chaprauli village in Sector 135, home to construction labour and migrant families, Wazidpur labour camp in Sector 134 where we also visited yesterday.

Today, the most number of buses with migrant workers were being dispatched from Bhangel, near the metro station in Sector 82, which is where we distributed almost 45% of the packages. People were lining and squatting on the streets awaiting buses, and in the words of the supervising policeman there, Mr. Avinash Kumar, the people we were able to provide a food packet to got at least one meal today. At that station, demand outstripped our supply.

We look forward to continue responding to the rapidly changing ground situation. 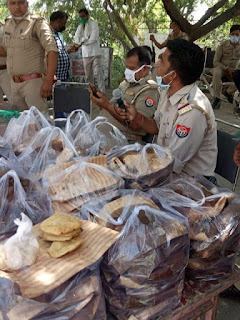 We are pleased to report that we could respond in a timely manner this morning to a request for food for workers being transported to Bihar. Bihar state government arranged four trains today from Dadri station in Noida to different stations in Bihar. Noida workers were being bused to the railway station from a temporary bus stand set up by Noida authorities near the metro station at NSEZ near Sector 82.

Three hundred and fifty packets of puri and chana made it in time to the bus stand. An orderly line, with respectful distance between people, soon assembled at the call for ‘garam puri’. With police support, we distributed our food packets to passengers bound for Katihar, Arrah, Patna, and Muzaffarpur. Passengers constituted daily wage workers, rickshaw pullers, construction labour, and unemployed domestic workers. Some were traveling alone, and several with small children. Six bus loads of passengers (over 600 people), several with our still warm brown paper-bagged meal, rolled off for the train station by noon.

We wish them a safe journey home.

Day 4 of our cooked food packet project saw us back at the bus stand at NSEZ from where almost 1200-1500 passengers are being transported to the railway station everyday. Two trains were scheduled to depart for Jharkhand and we responded to those passengers today.

Accordingly, our distribution was planned around the late afternoon departure of buses for passengers bound for Dhanbad, Kodarma, Ranchi, and Hazaribagh. In the time that we were there, 5 buses of passengers left for the station, some clutching a packet of puri halwa as they balanced luggage on their heads.

In all, we served 350 packets of puris and halwa and distributed 100 face masks

Day 5 of the packed food project began early for us. With five trains scheduled to depart for destinations in Bihar, passengers were thronging the bus stand at NSEZ early in the morning, anxious to get the railway station and secure places much in advance of train departures. We began distributing warm puri and chana packets by 10 in the morning and were out of packs soon after! Daily wage workers and unemployed domestic help who could no longer afford rent, and were having trouble feeding their families were returning to homes in Madhubani, Chapra, Samastipur, Motihari, Katihar. With the mercury soaring, we pray for the safe return of all. 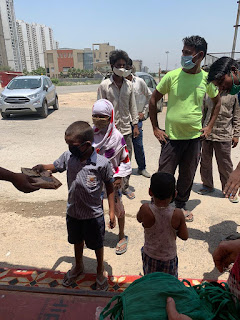 We also responded to a call for distribution of ~80 food packets to families of unemployed construction workers in Nangli Labour Camp in Sector 133.

In all, we distributed 350 food packets, and 50 adult and 10 children’s facemasks

Cries of prasad le lo, mangal ka prasad le lo rang out today at the bus station at NSEZ, as passengers boarded buses for onward journeys to Bihar. Families with small children, old people, young men, all being dispatched as rapidly as possible in buses to Kasna and Dinkore railway stations. Five trains are scheduled today for Buxar, Sivan, Madhubani, Arariya, and Bhagalpur to name a few destinations.

An old man with a walking stick enquiring about trains to Arrah. A man asking for an empty bottle to fill water, and a family with small children carrying a small earthen pot of water for their 4 day journey to Bihar. These were the kind of scenes we witnessed today.

With the help of the police and Noida authority workers, we were able to see off six bus loads of passengers, most of them clutching a bag of prasad.

With news reports of crowded stations and passengers clamouring for food and water over 3-6 day journeys in the sweltering heat, we pray for the safety of the homeward bound.

Day 7 of our packed food project started bright and early. By 9 am we were ready to serve the first batch of passengers lining the bus stand. Even though trains are scheduled from the early hours of the morning through late night, passengers have been leaving early, anxious to to beat the heat and be at the station. Two bus loads of passengers were dispatched by 10 am, and we served our hot puri halwa to the second batch of travellers who were trickling in and being sent directly into buses. As yesterday, there are 5 trains scheduled for Bihar. Today’s destinations are Khagariya, Gaya, Aurangabad, Muzaffarpur, and Motihari.

We also revisited the Nangli labour camp in Sector 133, faces of the children we served a few days ago, still fresh in the mind. This camp is comprised of construction labour families who have been through harrowing times in the past 2.5 months. In all, we served 350 packets of cooked food, and distributed 100 adult face masks and 15 children’s masks.

We pray, with all our heart, for better times for all. Especially for the children of

Thank you for the opportunity to serve.

Between May 21-27, 2020, The Satsang Seva Mission provided 2,450 hot food packets of Puri Halwa/Chana to migrant workers in Noida.  We also provided 985 face masks.